All articles tagged with "Mistress"

Lady Scarlet and her friend mistress Maya had an issue with this old man. He ran a firm that had swindled them of cash and they wanted him to pay them back. They had to make sure he learned his lesson when he refused to give them back their money. The mistresses forced him to lie down and after hard trampling him with their high heels, he agreed to give them their money.

These mistresses wanted to dominate this guy because he was bigoted and a bully. He had to be tamed and so the mistresses chose to do it together. All of them had a go at him before they chose to trample him together at the same time in order to make it even more painful for him. He shit himself and he peed himself and he realized he had to change.

This goddess did not like how this guy tried to get close and cozy with her man. He had to be dealt with and she did this with her ass as a way to send a warning. The girl was shocked at the way in which she was humiliated by the mistress. The mistress ensured that she had her asshole licked clean and that the girl smelled all of farts before chasing her away when she was degraded and humiliated.

Mistress Nika does not like to be catcalled and this guy did it when she was at her angriest. She was not going to take it and she took out her anger on him by trampling him as hard as she could with her high heel boots. He was shocked at what she did as he had hoped that she would like it or at least be flattered by it.

Lady Lisa was tired of always massaging her boyfriend's back but it never helped as he had a poor sitting posture. Today, his back was especially had and she had to massage it. But she was tired and she knew her hands would not help. So she did the next best thing and she used her hard trampling fetish to trample his back. She did it with her boots and with her bare feet.

This mistress did not like anyone to mess with her and she generally avoids being in a position where she gets angered and she has to react to what has been done to her. She is also a very tolerant person but today she had had it and she reacted cruelly. She crushed a plastic toy on this girl's back until it cracked on her skin and it bruised her badly.

Goddess Chanel hard tramples guy for being rude to her husband

Goddess Chanel is overprotective to her husband and she does not like anything bad to happen to him. Today this guy was rude to him. He did not mind but she did. And she did not let it end there. She used her high heels to trample the guy and to teach him never to be rude to people who had not even done anything to him. He learned his lesson.

This mistress wanted to dominate this loser for misleading her and she had to make sure he did not mislead anyone else after that. She was doing it so that she would ensure that the guy dropped that nonsense. The mistress stomped on him with her boots and he cried as she dug in. But his tears did nothing to make her stop. Instead, she made him cry until he peed his pants.

Mistress Jade was pissed at this guy for being late. He knew she had an important engagement but he went ahead to be late. She could not let it go and she had to punish him. She settled on using hard trampling to do it and it was cruel and painful for him as she did it. The mistress did it on his entire body and made sure every fiber of his body was in pain. 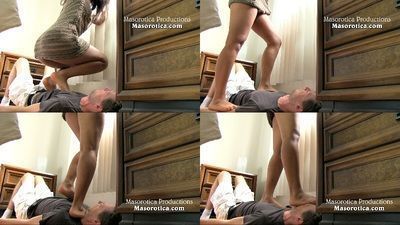 Mistress Natasha did not want to alert her superiors to the unruly behavior of one of her students as she was sure that he would be expelled. She felt that he had potential and she gave him a second chance but this was after she had trampled the shit out of him and from head to toe. She then observed him and was happy to see that he was making good progress.