All articles tagged with "Sneaker Trampling"

This mistress felt cheated when this guy told her he was interesting and she would not get bored but he ended up being the most boring person she had ever met. She laughed at the guy and she made up for her time and for the deception by trampling him hard using her sneakers. His pain was her pleasure as it served him right and made him learn his lesson.

Madame Marissa wanted to teach her friends how to humiliate losers. She had a slave so she called the slave to the kitchen and she told him to lie down. He did as told and he was trampled hard. Madame Marissa showed her slave how to trample the slave and they did it. They had a lot of fun and forgot that the slave was in a lot of pain.

Mistresses turn on drunkard for interfering with their rehearsal

This guy was drunk and tried to go backstage where these mistresses were rehearsing. They did not take his interruption kindly and they sought to punish him. They made him remove his shirt before they trampled him with their shoes. They even did it while smoking. The guy was drunk and at first could not feel pain. But as they continued, he started to gradually become sober and the more sober he became, the worse the pain being inflicted on him felt.

Whenever she's trampling someone, Miss Elise likes to use her sneakers. They are more effective than her bare feet and they do more damage. She tramples her slaves all over their bodies

Mistress Victoria is dressed up in shorts and sneakers to get some exercise by running. But why go outside when she has a slave she can violently trample on the bed. Much more fun! She stomps and jumps on his face, trampling his head and causing him lots of pain.

After a long and sweaty jogging session, Mistress Kitty returns home to torment and dominate her foot worshipping trample slave. She undoes her hot and sweaty trainers then forces them into his face so his nostrils are filled with the hot and spicy aroma of her dirty smelly feet. She also presses her wet and stinky black socks into his nose and tramples over his willing body in this humiliating session.

Just imagine if you were Princess Pumagirly's foot slave. She would make you lie on the wooden floor, just like her obedient foot slave in this clip, and then she would put on the stinkiest dirty pink boots and proceed to trample all over your head and naked body again and again using her full weight. Then she would force her dirty boots hard into your mouth and demand that you lick them clean.

Trampled and smothered by Mistress Katja

Mistress Katja has her loser slave on the floor. She is wearing her purple sneakers while trampling him really hard. His body and face are crushed under her soles. She then takes the shoes off and tramples him with her bare feet until he moans in pain. To shut him up she puts her sweaty smelly feet right into his face. He is smothered by her soles.

Goddess Pio is trampling all over her slaves skinny body with her black sneakers. Putting her full body weight on his chest she has a lot of fun stomping the loser. But she is also kicking his face quite hard a few times before she lets him lick the dirty soles of her sneakers. 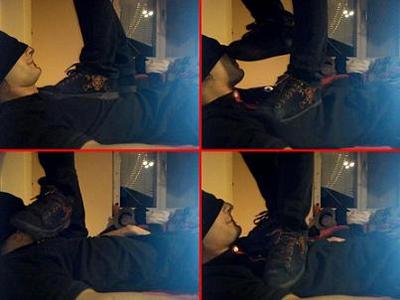