Madame Marissa wanted to check whether this loser was going to do what she wanted him to do. She was not sure he would survive where she wanted to send him so she had to toughen him up a little bit. To do this, she had to trample him and do it hardcore style. She used her sneakers to do it and she inflicted a lot of pain on him.

Mistress Krystal did not like how lazy this loser was. He had soft hands because he never did anything. She used her sneakers to trample his hands and his fingers. She inflicted a lot of pain as she hard trampled and she even jumped on him. She also kicked and stomped on his stomach and the rest of his body before she let him go. She warned him never to be lazy again.

Lady Kara wanted to gag her slave and she did as cruelly as she was able to. She used her bare feet to it. She stepped on his throat and she also inserted his foot in her mouth and she gagged him. She wanted to choke him so she made sure he threw up but he drank his vomit and nearly choked on it. She laughed at him before she let him go.

Princess McKenzie wanted to crush her slave's hands and fingers because according to her, they were the ones responsible for what he had done. She had to teach him a lesson using her hands and her fingers and that is what she did. She cruelly used her high heels to trample and stomp on him. She did it as cruelly as she wanted and she was sure he had learned his lesson by the time she was done with him.

Mistress Serena was mad when she learned that her slave had lied to her. He had pretended to be sick so that he could not do anything. He also knew she would take care of him and nurse him. She did all that and was mad when she realized it was all fake. She jumped on his stomach and crushed his head and trampled him all over as punishment for lying.

When these mistresses get mad, someone gets hurt. This loser was the source of their anger and he had to be taught a lesson. The mistresses descended on him with their sneakers and trampled him hard. He cried as the mistresses hard trampled him. He tried to beg them for mercy but they were having a great time at his expense and did not even hear his pleas for mercy.

Mistress Tanisha did not like this guy. She did her best to avoid meeting him. But he had other ideas and seemed to follow her and to seek her attention. She was fed up today after he ignored her polite requests to stay away. She punished him using her socks and her bare feet. She hard trampled him and made him regret following her and seeking her attention because he got the attention but not the kind he wanted. 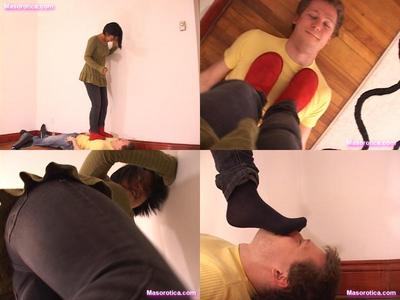 This mistress did not like how this loser called her fat. She was pissed off and she sought to make him learn a lesson. She hard trampled his face and she used her bare feet to do it. She made him experience the force of her full weight as it rested on his face as well as on his balls. She crushed and trampled him with both her boots and her bare feet.

Lady Deina did not want her slave coming home at late hours. She wanted him to respect her home and to come early when she sent him. She had to send a message to him and she did it cruelly for him to understand her. She forced the info into him by trampling him on the face. She crushed his head with her bare feet and she made him cry.

Lady Betty realized that her slave had messed up but instead of telling her, he hid that fact from her hoping she would never find out. She was pissed when she found out and told him she would have forgiven him if he had gone to her first. Now she had to teach him a lesson and she did it using her boots and her spit. She humiliated him, tortured him and degraded him.